Deep Jungle Kratom was one of the earliest online Mitragyna speciosa vendors in the United States. Dating back to 2013, they’ve seen a lot of other vendors come and go, which definitely speaks well to their viability. But have they earned their longevity via great products or marketing? Let’s find out!

In the past, Deep Jungle Kratom was well-known for selling some of the hardest to find strains of Mitragyna speciosa. Now, however, they’ve severely limited their supply. We’re not sure exactly what happened, but this has put Deep Jungle in a less than desirable position. Despite this, they still seem to have many fans in the Kratom community. As we’ve seen several times in the past, loyalty can carry a company a long way, and that certainly seems to be working here.

We’re truly sorry to report that some of the long-time favorites that DJK once carried are no longer listed in their shop. The company focused on powder only and has a rather spartan menu as of late March 2020.

One thing is for sure; people aren’t still flocking to Deep Jungle Kratom because of their website design. In fact, the design is so subpar that many newcomers probably question the legitimacy of this vendor. When you combine that with the fact that you have to jump through a few hoops to even place and pay for an order, it would be understandable for people to look for a more simplistic solution.

So, why haven’t DJK’s loyal customers gone elsewhere? As you’re about to find out, it all comes down to price.

We love it that all five strains they sell have the exact same price points. And although you can get a better price from some vendors, Deep Jungle Kratom is competitive enough to explain the loyalty that has kept this vendor afloat since 2013.

There do not appear to be any current coupon codes or other discounts available for Deep Jungle Kratom as of late March 2020. But before you buy Kratom from this vendor, it wouldn’t hurt to double check via a quick Google search.

As we’ve mentioned throughout this review, DJK has a steady crop of customers. In a thread on Reddit that’s dedicated to this vendor, you’ll find lots of evidence of how beloved DJK has become. The original poster stated, “I’ve been ordering from them for years.” The first response says, “I was a big fan of them in the past and they were actually my first vendor…to this day, DJK still has my all time favorite Red Borneo.”

Another forum member said, “I found two of the best strains ever from them when I first tried them. After 6 months I placed another order for the same thing and they weren’t as good, which was disappointing. But still worth it. I just figured my body chemistry was different than it was during that first order.”

A previous satisfied customer of Deep Jungle Kratom said on Reddit that “they’re good guys, and the shipments always arrived quickly.” This is good to hear, and it adds up well with the vendor’s long history. However, we don’t like it that there is absolutely no mention of their returns policy (if any) on their website. Nor is there a way to contact them aside from sending an email to their orders department. 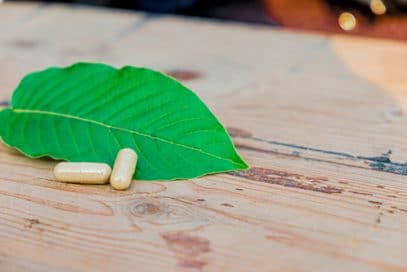 The reviews we found from real-world customers seem to indicate that Deep Jungle Kratom is every bit as reputable as they’ve always been. We’re saddened by their more recent much less robust menu options, and we aren’t happy with their lack of transparency when it comes to returns. However, Deep Jungle Kratom has earned their place among the longest lasting Mitragyna speciosa vendors, and that buys them a lot of grace in terms of having a poor-quality website. From everything we’ve heard, DJK is still worth checking out.

Whether you’re hesitant about DJK’s changes or you simply want a strain they no longer offer, we can help you find a viable alternative.  Visit The Golden Monk’s Complete List of the Best Kratom Vendors to find an extensive list of online resources for buying Mitragyna speciosa.