Kryptic Kratom is a B2B kratom distributor that’s taken the market by storm with its signature kratom shots. Based in Chandler, AZ, Kryptic is the liquid kratom extract product that is putting Maricopa County on the map. You can see it for yourself by visiting: http://kryptickratom.com.

You’ve undoubtedly heard about Kryptic Kratom. It’s been compared to everything from OPMS to K Chill Direct. Looking to find out more about this five-star kratom brand and its titular innovation? Read on for the full skinny on Kryptic Kratom in our comprehensive kratom retail brand review.

What is Kryptic Kratom? Kryptic Kratom is a premium kratom shot from the folks at DBZ Enterprises. This Arizona-based company was founded in 2015 and came right out the gate firing on all cylinders with its much-celebrated K-Chill creation.

For those who don’t know, K-Chill was the first liquid kratom shot to be approved by the AKA (American Kratom Association). K-Chill is purportedly an exhilarating and fast-acting formula that’s also longer lasting than most kratom solutions on the market.

So, how does Kryptic Kratom differ from its predecessor? Where K-Chill is believed to possess a more revitalizing aroma, Kryptic Kratom is said to be much smoother, eliciting a fragrance that is as surprising as it is satisfying. One YouTuber has even posted about its “Alpha vibe.”

We are never inclined to recommend such combinations, as we believe that stacking can be detrimental, especially if you are unaware of potential side effects. The fact is, that each of these ingredients may have undesirable consequences on its own. When paired with all the others you could be in for real trouble.

Nevertheless, Kryptic Kratom has been marketed as the low-cal, low-sugar diet-complimentary version of a kratom shot. If nothing else, this two-ounce kratom shot stays true to its marketing – Kryptic Kratom contains thirty-five calories, nine grams of carbs, and eight grams of sugar per ounce.

Kryptic Kratom tincture reviews have been mixed, with at least one reviewer trying Kryptic Kratom’s standard shot three times before taking a head shop’s recommendation and upgrading to a tincture. In both the standard shot and the tincture’s case, said YouTube reviewers said they were disappointed. 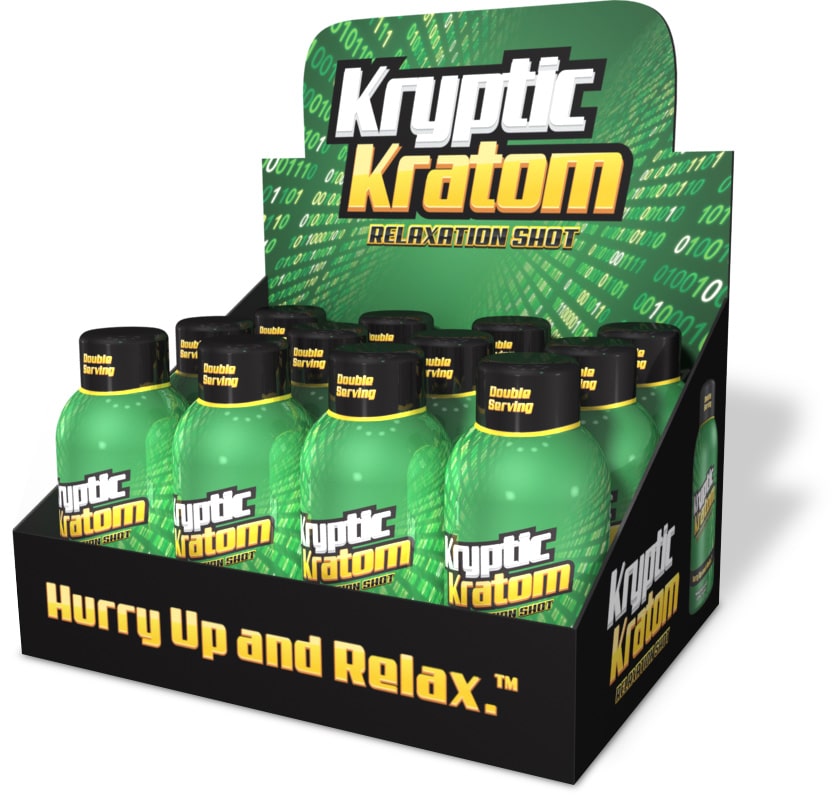 “Don’t get me wrong,” they say at one point. “It definitely worked.” They go on to explain that it was “chill” and “made it easier to talk to people” and to make light of things, but they were expecting a much more robust “potion.” After four shots, this review concluded that the shot wasn’t for them.

The price was another factor for this reviewer, as Kryptic Kratom shots are generally pretty expensive. This is true online as it is IRL; online vendors charge as much as many brick-and-mortar smoke shops, with some charging even more than the head shop scene.

Kryptic Kratom’s packaging is classic head shop marketing at work. The standard two-ounce kratom shot’s whole design is geared toward an audience that puts a lot of stock in the red pill vs blue pill theory posited by The Matrix. It is also marketed towards a more gullible demographic.

“Hurry Up & Relax” is Kryptic Kratom’s ad slogan, which is as rude as marketing can get, even if it is designed to convey the fast-acting nature of liquid kratom shots. There is only one problem: Kryptic Kratom doesn’t work as fast as its marketers claim, nor is it as potent as you’d think.

In spite of some consumers being sharply divided on the subject, Kryptic Kratom remains a well-regarded extract brand. As a matter of fact, there are dozens of positive reviews on some platforms, with four and five-star ratings on others.

DBZ Enterprises does not offer direct-to-consumer sales. If you expect delivery of kratom shots, you will have to arrange for delivery through a local shop or delivery service. Alternatively, sites like Paylesskratom.com and Kurds. co stock brands like Kryptic Kratom and K-Chill. 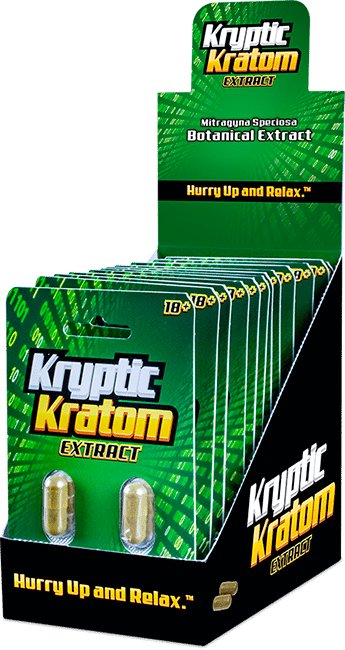 Quality is definitely subjective when it comes to kratom shots, with some users claiming they caused them to freak out and others claiming they did absolutely nothing whatsoever. Kryptic Kratom is no exception. This two-ounce two-serving bottle is extremely hit or miss. It’s definitely not for everyone.

Kryptickratom.com’s web design may be appealing to red pill theorists who dig the homepage’s background, but beneath the surface, there is not much functionality. If you click on the About link it leads nowhere. Likewise, the FAQ page does not work, and the site itself lacks security.

The Kryptic Kratom price will vary depending on where you decide to pick some up, whether it’s an online retailer, a wholesale website, or a land-based smoke shop location. Prices start at $6.99 per two-ounce bottle, with one gram of kratom extract in each bottle.

While this price wouldn’t seem fair if it applied to plain leaf kratom powder it seems relatively reasonable given its content. Each two-ounce bottle contains 10% mitragynine kratom extract.

For the sake of comparison, Kats Botanicals offers a Full Spectrum 10% Kratom Extract for $19.99, while a liquid kratom shot of MIT45 Gold Liquid Kratom Shot can go for as much as $17.99. Some shops only offer such extracts in bulk, with twelve counts going for as much as $79.99.

Don’t let their close proximity fool you. Just because MIT45 Kratom and Kryptic Kratom are often displayed side-by-side at smoke shops doesn’t mean they are anything alike. On the contrary, Kryptic Kratom is a whisper compared to MIT45’s scream.

Kryptic Kratom is said to be ideal for beginners who are acclimating to the aroma of kratom extracts. On the other hand, MIT45 50x Maeng Da Extract is powerful stuff that can often be inundating to the uninitiated. Kryptic Kratom is more suited to the casual kratom enthusiast versus the OG connoisseur.

DBZ Enterprises and its affiliates offer promo codes, product updates, and more via their online newsletter. You can subscribe to this newsletter by visiting kryptickratom.com. Once you tap the Subscribe button, you’ll receive special offers and be eligible for samples, codes, and more.

Kryptic Kratom Reddit posts have been scarce, with minimal references at the usual online kratom forums. This may have to do with the similarity in name to Kryton Kratom. Alternatively, it may be due to the fact that it has been eclipsed by K-Chill Kratom Shots. In any event, Kryptic Kratom is popular.

Over at Cusrev.com, customers have shared their love for this kratom shot, with one reviewer writing, “I have made these a part of my daily routine. They are similar to the powder but easier to take on the go.” Another customer agreed, writing, “love it for on the go.”

One reviewer said, “Wish I’d known about Kratom long before I did. I could run circles around people half my age! I absolutely love it.” Meanwhile, another reviewer wrote, “Love it. These are becoming my go-to.”

Still another reviewer said, “It’s a great product. I give it five stars! The service is also rated at five stars.” And yet another user wrote, “Nice alternative to the blue shot!”

There is limited negative feedback online, but naysayers are united in their distaste for the flavor of Kryptic Kratom shots. One reviewer said, “the taste is tough to handle. I’d describe it as the worst cup of coffee and seaweed combo with a harsh aftertaste. It’s just tough to swallow.”

Another customer stressed the subjective weakness of the shot, writing, “Unless you are looking for something extremely mild, this does not do much of anything.” Still another customer expressed a neutral point of view, writing, “Much like the blue K-chill shot. Great for starters.”

Although third-party laboratory testing does not appear to be mentioned on Kryptic Kratom’s website, the product itself is most certainly analyzed for impurities and potency. As you will see in a moment, DBZ Enterprises submits its products for a third-party audit as part of its compliance with the AKA.

Yes. Although it is one of many near-identical retail kratom shots, Kryptic Kratom is not another hinky Krypton Kratom type. It is an above-board brand that exists under the umbrella of America’s most far-reaching domestic wholesale distributor.

Kryptic Kratom follows all industry standards and local requirements. Each bottle displays appropriate disclaimers and warnings, as well as detailed supplement facts. Each package clearly states how many milligrams of kratom are found in each packet, making it easy for the experienced to measure out.

Kryptic Kratom is a proud participant in the AKA’s GMP (Good Manufacturing Practices) Standards Program. This is always a good sign, even if it’s not technically a must for all kratom vendors. GMP participation demonstrates a willingness to yield to industry guidelines and scientific expertise.

The GMP Standards Program was established in an effort to keep customers safe while keeping vendors honest. As such, all participating kratom processors must adhere to the organization’s requirements, which extend from manufacturing and labeling to marketing, distribution, sales, etc. 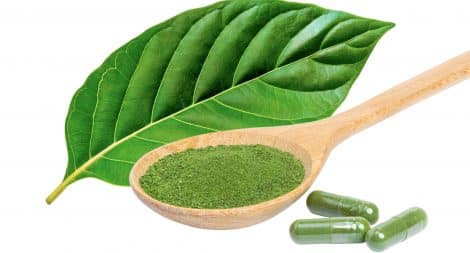 In summary, Kryptic Kratom may be smooth, but it’s a cut above the rest in terms of quality and legitimacy. This GMP-certified kratom shot is a product you can trust from a company that knows its stuff. Kryptic Kratom is the five-star liquid kratom extract many have been searching for.

Still on the fence? There are plenty of kratom vendors offering extracts in a variety of forms. You can shop around to compare products, pricing, policies, and more. Check out our Complete List of the Best Kratom Vendors for an overview of the top kratom brands.