Eden’s Ethnos Kratom was a San Francisco-based vendor. No one is 100 percent certain when they closed, but it appears to have been sometime in the year 2017.

Perhaps the reason that Eden’s Ethnos closed permanently is because their Kratom just wasn’t very good. They were known for selling headshop Kratom, and that’s only going to get you so far. Additionally, they lied by telling customers that refunds were no longer being accepted due to the “upcoming ban” on Mitragyna speciosa.

Once upon a time, you could get Kratom products from this vendor’s website. However, the site was never very clear about what type of products were in stock. Here’s an example of what Eden’s Ethnos sold:

You can no longer buy Kratom from Eden’s Ethnos. Even when you could, though, finding prices was like pulling teeth. We do know that a 30-count bottle of Maeng Da capsules sold for $22.95.

This vendor is no longer in business, so you won’t find any promo or coupon codes for them.

Here’s where the rubber meets the road, and it’s not good. It appears that Eden’s Ethnos went out of business because most people did not like their products. According to Reddit:

Of course, there’s always someone with something good to say: 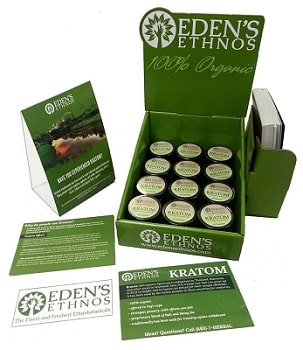 We don’t like it that Eden’s Ethnos didn’t offer refunds because of a lie. However, we did find this one positive review about their customer service:

Whether you liked them or hated them, the bottom line is that Eden’s Ethnos is no longer in business. In fact, it says on their Facebook page that they’re permanently closed. The last post was in 2017, so they’ve been out of business for a long time, at least according to Kratom’s standards.

Are you looking for a vendor that’s still open and has a good reputation? Visit The Golden Monk’s Complete List of the Best Kratom Vendors. With more than 115+ vendors, we definitely have one that can take care of you!