In an earlier post, we discussed some of the very best UEI Kratom vendors. Now, we’re going to take a closer look at this topic by delving into vendors who sell UEI Kratom Capsules. For the uninitiated, UEI stands for Ultra-Enhanced Indo. UEI comes from blending the extracts of two strains (typically Indo and Bali).

This product is most commonly found in powder form, but those who prefer to buy Kratom in capsules can do so via the following vendors.

Vegetarian-friendly UEI Kratom Capsules are available from Kratom Herbs. This vendor sells UEI Capsules in quantities as few as one to as many as 300. Pricing for one is $3.50, but most people are going to start out with at least 10 capsules for $29.50. Kratom Herbs is a BBB Accredited Business that’s been selling Kratom online since 2005.

This honorable mention from our last UEI vendors list carries vegetarian UEI Kratom Capsules starting at $26.99 for five capsules. Labeled as “very unique” and “the best of the best,” these capsules have a 5-star rating from customers. They’re so popular, in fact, that you may have a hard time finding them in stock. Keep checking, though, because UEI Kratom is always a hot seller.

As the aptly named Kratom Caps suggests, this vendor specializes in Kratom Capsules. Their UEI offering starts at $39.99 for 10 capsules. Kratom Caps guarantees their capsules are authentic and vegetarian. Like most UEI Kratom Capsule vendors, there will be 500 mg of UEI inside every capsule.

Ultra Enhanced Indo UEI Caps are one of the best-selling products at Zerbals. This vendor’s UEI Capsules have a good reputation, but you’ll have to dive in with a minimum order of 25 caps. This will set you back $91.50, or you can invest in a 100-capsule bulk package for $349.99. Each 500 mg capsule contains 350 mg of UEI plus 150 mg of Ultra Potent Indo.

The UEI Capsules from Left Coast Kratom are a big hit, which may make it difficult to find them in stock. They sell these capsules in 5, 10, and 20 count packs, ranging from $26.99 to $96.99. Left Coast Kratom became one of the first members of the American Kratom Association’s Good Manufacturing Practice (GMP) Standards Program. This means their UEI Kratom Capsules have passed third-party testing and are manufactured according to the AKA’s high standards.

Earning itself a spot on both our UEI Kratom lists is Kraken Kratom. As another member of the AKA’s GMP program, you can rely on this vendor to provide quality UEI Capsules. Of course, finding them in stock can present a lot of difficulties. The basic fact remains that UEI Kratom Capsules are one of the most highly sought-after products in the Kratom industry.

Do you need other Kratom products, too? Then head over to our roundup of the best Kratom vendors. 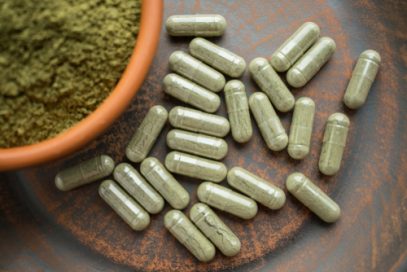 Because they’re so hard to keep in stock and are also expensive, there aren’t a lot of other well-known resources for buying UEI Kratom Capsules. Fortunately, you have six good options above!