Michigan Kratom Legality and Where To Buy

Michigan has a wide array of brick and mortar stores that sell Kratom, which makes it easy to pick up your favorite strain Mitragyna speciosa throughout the state. One of the largest concentrations of shops with Kratom can be found in Metro Detroit. There are more than 20 smoke shops in this area that advertise Kratom, along with many others that stock Kratom without promoting it. To make things easier for you to buy Kratom, The Golden Monk put together a list of Michigan Kratom vendors. Additionally, we’ve preceded the list with a discussion of the current legal status of Kratom in the Wolverine State.

Legality of Kratom in Michigan

If you’re a Michigan resident or are merely planning a visit to the Great Lakes State, you don’t have to worry about legal issues when you purchase Kratom. 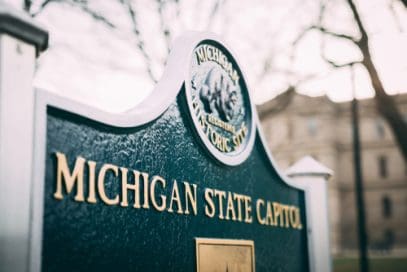 The state did try to ban Kratom in 2014, but the bill failed to pass, in part because of a petition with more than 1,700 signatures. There have been two further attempts to ban at least some portion of Kratom sales, and they’ve also both failed to move forward.

3 of the Best Kratom Shops in Metro Detroit

Michigan has close to 10 million residents and just under 4.3 million of them reside in the Metro Detroit area. There’s such an extensive selection of head and smoke shops to choose from. Because of this, we’ve decided to narrow it down to just 3 of the top-rated locations (per Google reviews).

Located in Wyandotte, MI, the Vape Hut is a vaporizer store that proudly lists Kratom in its name and on all of its signage. This brick and mortar store also boasts the best rating in Metro Detroit. Plus, it also and carries an extensive amount of vaping juice and CBD topicals for skin care.

This Roseville, MI, smoke shop promises the area’s largest selection of Kratom. Some of the other items you can find here include hookah supplies, hemp oil, and lottery tickets. Smoker’s Alley is definitely a crowd pleaser with a 4.8-star average from 235 local reviewers

One of the things that really sets Tobacco Republic apart is the owner’s dedication to ensuring everyone in Dearborn Heights has time to pick up Kratom and other supplies. This smoke shop is open from 10:30 a.m. until 11 p.m. daily. You’ll never have to wait very long to pick up more Kratom because of this.

The Upper Peninsula (U.P.) of Michigan is like a different world when compared to Metro Detroit. But that doesn’t mean you can’t find Kratom there. Marquette, MI, provides the best options such as Northern Lights Glass – where you can also buy some art – and Upper Peninsula in Smoke, which has a strong retro vibe.

Grand Rapids is the Mitten State’s second most populated area. There are a handful of stores selling Kratom in Grand Rapids, including the top-rated West Side Quik Mart and Shakedown Street. Western Michigan also features Purple East in Kentwood, Psycle Sam’s Heady Glass in Laketon Township, and Joost Vapor in Grand Haven.

If all of these options still aren’t enough, you can also legally purchase Kratom in Michigan from online stores that cater to Michigan Kratom enthusiasts such as Original Harvest Kratom. If you like reading about Michigan Kratom vendors, be sure to read our collection about some of the best Kratom retailers around.