Home/A Complete List of the Best Kratom Vendors/Super K Kratom Review – Should you Buy from them ?

Super K Kratom Review – Should you Buy from them ?

If you’re a regular on the smoke shop kratom circuit, you have undoubtedly seen Super K Kratom in the wild. This popular new form of kratom extract is a product of South Sea Ventures, the makers of MIT 45. This Nevada-based vendor rolled out its Super K Kratom line at some point in 2019. At the time, Super K Kratom was sold exclusively via a Yola page, but it quickly grew into a successful wholesale kratom operation. Today, Super Kratom can be purchased through any number of reputable third-party vendors, including Acadia CBD, K-Chill Direct, NuWave Botanicals, and Payless Kratom. If you’re curious about how Super K Kratom compares to OPMS Gold and other popular head shop brands, you’re in luck. Today, we’re going to take a closer look at what this brand is all about. We’ll tell you everything you need to know in our comprehensive kratom vendor review.

Super K Kratom Special Edition Extract is advertised as the five-star extract from the makers of MIT 45 Kratom. It is said to be produced in the United States, yet MIT 45 itself is purportedly created using Maeng Da Kratom grown (and processed) in Holland.  South Seas Ventures does not make clear the difference between Super K Extract Strong Kratom and Super K Special Edition. Both contain thirty plus alkaloids, both are comprised of a liquid kratom formula, and both claim to provide multiple servings. Super K Kratom’s packaging leaves much to be desired, particularly in the GMP (Good Manufacturing Practices) department. Its products lack any kind of proper labeling, whether you’re looking for serving sizes, ingredients, origins, or appropriate warnings. In fact, the only warning on the package reads, “Six parts to bottle,” which presumably refers to how many servings are in its liquid kratom shots.

As with many smoke shop kratom brands, Super K Kratom is short-lived and overpriced. Unlike other smoke shop brands, you won’t be able to direct your complaint to the appropriate place because its information does not appear on its actual products. Sadly, Super K Extra Strong Kratom is yet another Mitragyna speciosa product whose name is nothing more than a cheap come-on. This vendor reels you in with the promise of something more potent than a traditional dose of kratom powder, only to deliver an item that falls flat of even the weakest plain leaf kratom. What’s worse, the taste of Super K Kratom is down there with the worst of the worst. If Vitalize Kratom Shot tastes like “a green apple’s a**,” then Super K Kratom Shot could best be described as tasting like a shot of rancid orange juice with a Steel Reserve chaser.

A single shot of Super K Kratom Extract Special Edition is said to be akin to ten grams of raw kratom powder in potency and duration. This is problematic for a number of reasons, not least of which is the implication of a ten-gram dose. Herbal enthusiasts have discussed the dangers of large volume kratom use, which includes anything in the area of ten grams or more. By purporting to be as strong as a ten-gram dose, Super K Kratom is promoting irresponsibility. Furthermore, Super K Kratom’s liquid kratom extract contains thirty milliliters of Mitragyna speciosa solution, which should amount to multiple servings. For a kratom extract to contain multiple servings, it should consist of a minimum of thirty grams of mass. It would seem that we are looking at bold and unsubstantiated claims, and little more.

Prices start at around $22-23 per bottle for a single 30ml liquid kratom shot, with three packs going for $21.99 each. You can get a six-pack for $20.99 each, a twelve-pack for $19.99 each, a forty-pack for $18.33 each, or an eighty-pack for $17.99 each. These prices are based on current averages, although you can expect prices to rise and fall as time goes on. NuWave Botanicals now offers Super K Extract Strong Purple as bulk kratom, with twenty bottles going for $440.00. This equates to approximately $22 per bottle, which is well within the acceptable range for a bottle of Super K’s size. For example, Payless Kratom charges $25.49 for a 20ml bottle of Kr8om Liquid Concentrate, while Buy Kratom Extracts charges $41.95 for the same. Pop Kratom charges $29.99 for a single 30ml bottle of Super K Extra Strong Tincture.

Most sources for Super K sell discounted products, including clearance items and limited edition deals. Super K Special Edition Kratom Extract Shot is listed under K Chill Direct’s progressive discounts, where you can get a three-pack for $11.33 each. Additionally, third-party suppliers accept promo codes at checkout, some of which are redeemable for up to twenty percent off your total. For example, K Chill Direct invites visitors to sign up for its e-mail newsletter to receive extra discounts, while NuWave Botanicals offers coupons and special offers on its social media accounts.

How to Reach Super K Kratom

To learn more about manufacturing, testing, and product availability, you can contact a retailer via their website. If you would prefer to hear it from the horse’s mouth, you can contact MIT 45’s customer service line at (801)797-8700.

Super K Extra Strong Reddit reviews have illustrated the potential hazards of these products, with one post expressing a user’s nervousness and dismay after use. Consumer feedback has not been any better. Members of online kratom forums have been critical of kratom extracts for some time, with Reddit members being especially judgmental. For example, one member said, “These are hyped as being super strong online, I’m convinced it’s a lie.” In a Super K Special Edition Reddit post, another member wrote, “The aroma was weak and only lasted about 10 minutes. Such a waste of $$.” Elsewhere, a reviewer said that Super K Kratom fails to live up to its name because it is weak, ephemeral, and overly expensive. Despite being in business for years, the company behind Super K Kratom has done little to improve its consumer reputation. Perhaps this owes to its investment in Super K Kratom wholesale transactions; this vendor would rather target third-party suppliers instead of appealing directly to consumers.

There are few positive reviews associated with this brand or its extracts. On the other hand, customers have not lodged any complaints with the Better Business Bureau, nor have any poor customer reviews been cataloged over at Trustpilot.

Yes. Although certificates of analysis are not listed on the official MIT 45 website, you can punch in a lot number to search for the related kratom batch. Alternatively, you can rely on Super K Kratom’s good standing with the AKA to confirm its history of third-party laboratory testing. Lab results are an important aspect of the kratom consumer experience, as it enables you to make sure you are buying Mitragyna speciosa that is safe and efficacious. Thorough testing demonstrates potency as well as purity, showing levels of potential contamination and concentrations of key alkaloids.

Technically, Super K Kratom is a legitimate product, insofar as it has been tested and has been classified as acceptable by third parties. However, doses can vary from batch to batch, and lab results may not always be 100% accurate. Based on our research, users have been displeased by their experiences with this brand. 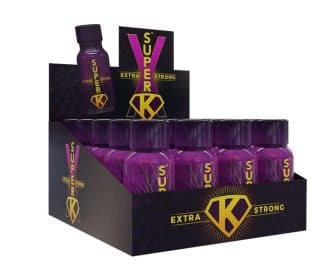 As we mentioned earlier, Super K is made by the folks behind MIT 45. This is a trusted brand that has achieved AKA approval for participating in its GMP program. AKA GMP certification assures you that you are dealing with a vendor that checks its products for quality and safety. The AKA’s GMP program is also important because it establishes standards by which reputable vendors conduct their manufacturing, labeling, marketing, and distribution of kratom products. AKA’s GMP protocol is in keeping with the regulations and restrictions of the Kratom Consumer Protection Act and similar legislation. For those who don’t know, the Kratom Consumer Protection Act is a bill that creates provisions requiring dealers to ethically and lawfully prepare their kratom products for market. It also requires retailers and distributors to provide appropriate labeling and limit sales to those of an appropriate age.

Several US states have adapted their own variations of the Kratom Consumer Protection Act, with some setting the age minimum at eighteen, while others set it at twenty-one. In both cases, state legislators seek to limit the potential for unintentional overdose or similar health hazards. Many trustworthy brands are working in tandem with nonprofits like the AKA to ensure compliance with these state laws.

Although we have not been impressed by this brand, there is a reason why it remains on retailers’ shelves. MIT 45 Kratom is a legendary product that’s found favor with consumers. It was only a matter of time before Super K Kratom became equally well-known. The difference between the two seems clear—MIT 45 Kratom became famous, while Super K Kratom has become notorious.