Nutraspec’s online store can be accessed at https://nutraspec.com. This West Coast ethnobotanical vendor has captured the zeitgeist with its trailblazing Flavored Kratom and its One Gram Capsules. Its site is sleek, its discounts are dynamite, and its strains are potent.

Read on for the full skinny on this next generation supplier as we dive into the pros and cons of Nutraspec Kratom. We’ll cover everything from purchasing options, payment methods, and GMP certification in our comprehensive vendor review.

Nutraspec is an international brand that was first established in the United Kingdom back in 2008. As its star swiftly rose, it would appear that owner Paula Wilson decided to expand operations to Chino Hills, CA.

Since its inception, Nutraspec has been making waves with its Flavored Kratom, which paved the way for similar products like KRATOMade and Kratom Gummies. Unlike its competitors, Flavored Kratom is paleo-friendly and free of synthetic additives. 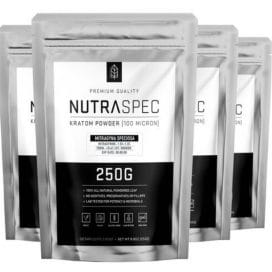 Nutraspec.com was introduced in 2016 and it couldn’t have arrived at a better time. While other vendors were coming under fire for selling contaminated products, Nutraspec was investing in state-of-the-art milling equipment and third-party multi-factor analysis.

There are at least fifteen kratom strains in all, some of which are quite rare. Think Green Jongkong, an oft-imitated cultivar that is frequently sourced from Florida. Nutraspec sells the real deal, sourcing its Jongkong strain from the Djongkong region of West Kalimantan in Indonesia.

Let’s talk about Nutraspec’s packaging for a moment. Many online vendors produce fancy packaging with flashy logos and buzz-worthy blend names, but few bother to give patrons a sturdy and easy-to-store item.

Nutraspec provides both—its bottles are of a heavy plastic that’s not easily dented or otherwise damaged, and its powders come in resealable pouches that are firm and difficult to pierce. All of its items feature simple black-and-white design, with detailed and professional labeling.

Green Maeng Da Bomb Popsicle is among its most exciting items, which was introduced as part of its partnership with Krabot.com. Nutraspec Flavored Kratom comes in three tasty variations in all—Bomb Pop, Push Pop, and Sour Gummy, respectively.

Other items include kratom sample packs and kratom extracts. Nutraspec’s liquid kratom shot sells for $14.99, which gets you fifteen milliliters of one hundred fifty milligram solution.

This vendor’s sensational powders start at $14.49 for fifty grams, which is ahead of the industry curve by leaps and bounds. Many online vendors charge $20 or more for this amount of kratom tea. For example, Zen Life Naturals charges $20 for fifty grams, while Urban Ice Organics charges $32.99 for sixty grams.

You can also get two, three, or four-way split kilos, which consist of one thousand grams of kratom powder in total. You’ll get the four strains of your choice for just $139.99. That equates to less than fourteen cents per gram for something that other vendors sell for as much as $160.00. For instance, Austin Organic Village offers four-way kratom kilo splits for $154.00. 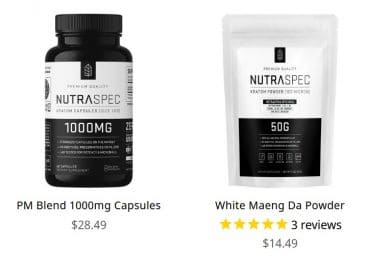 All of Nutraspec’s strains are accessible in powder and capsule form, with encapsulated kratom starting at $26.49 for a sixty-count of one thousand milligram caps. You can pick up one hundred eighty capsules for $69.49, which is a bit steep compared to other brands. For instance, My Kratom Club charges $54.99 for the same amount of caps.

You can buy kratom from Nutraspec with Bitcoin (and other cryptocurrencies), CashApp, MasterCard, Venmo, VISA, or Zelle. Those who pay with crypto automatically receive a ten percent discount during the checkout process.

You can subscribe to this vendor’s e-mail newsletter to unlock awesome promo codes, special offers, and up-to-the-minute news. Updates include future kratom sales and a heads up when new products drop. Nutraspec discount codes are redeemable toward your total at checkout.

Nutraspec Kratom Reddit posts have been unanimously positive, with one member writing, “I seriously am loving Nutraspec. I asked them if I could become an affiliate and they said yes! I love their blends the most and they have flavored tea!” Another member agreed, writing, “I’ve tried over 10 vendors in the last 3 years, Nutraspec has the strongest kratom. I just wish they accepted crypto.” 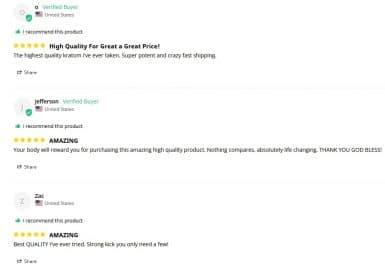 This last comment demonstrates the vendor’s commitment to customer satisfaction. Within days of this comment being posted, Nutraspec had added cryptocurrency to its list of accepted payment options.

One Reddit member said, “Their stuff is definitely potent, but unless they’ve tried and checked the labs of every other place … how could they know theirs is the strongest?” Another member said, “Never heard of them, but their prices are very high.”

Those who have used this brand appear to be loyal to the brand. Thus far, there have been no complaints lodged with the Better Business Bureau, nor have any negative reviews been filed with Trustpilot.

Nutraspec’s strains are submitted for independent third-party testing, where they are analyzed for heavy metals, microbials, and as many as seven disparate alkaloids. Certificates of analysis can be found by scanning the QR code on the back of your bag or bottle. It’s easy to scan with any iPhone.

Yes. Our research suggests that Nutraspec is a viable option in the current marketplace. Its products are potent, its prices are reasonable, its discounts are exceptional, and its payment methods are convenient.

This seller gives consumers all of the assurances they deserve, such as lab results, expedited shipping, secure checkout, discreet packaging, and a money-back guarantee. It doesn’t get much more legit than this.

Though it has demonstrated its value in many ways, Nutraspec has not participated in the AKA’s GMP (Good Manufacturing Practices) program. As of this writing, this vendor has not been added to the AKA’s list of GMP-compliant brands.

The GMP program is essential to the future of the kratom industry, as it establishes clear standards for the manufacturing, labeling, marketing, distribution, and verification of Mitragyna speciosa products. These standards align with those laid out in the Kratom Consumer Protection Act.

In summary, Nutraspec is a valuable kratom vendor with an awesome array of exotic kratom offerings. Its Flavored Kratom is fast becoming a fan favorite, while its four-way split kilos have kept a smile on customers’ faces during these increasingly trying times. Most importantly, Nutraspec is backed by a satisfaction guarantee and independent analysis.

Still on the fence? Want to learn about the pros and cons of competing sellers? You can compare prices and more by checking out our Complete List of the Best Kratom Vendors.