Emerson Naturals is a four-star sundries merchant specializing in smoke shop products. For nearly two years, its line of kratom powder and kratom capsules has been among its bestsellers, but something appears to have changed. Today, Emerson Naturals continues to stock herbs and cosmetic goods, but the Mitragyna speciosa leaf is M.I.A.

If you’ve been thinking about visiting the Blue Ridge Mountains to get your hands on some top-shelf kratom, you may be out of luck. Luckily for you, there are plenty of viable alternatives. We’ll tell you all about this brand and its finest substitutes in our comprehensive Emerson Naturals Kratom Vendor Review.

Located in the western metropolis of Asheville, NC, AFG Distribution is a nationwide wholesaler with a reputation for sourcing the highest quality botanicals from around the world. Its product line has included everything from organic pre-rolls and hand-blown glass to exotic herbs and handmade soaps. For a long time, the company carried kratom alongside its less-controversial plants.

These two brick-and-mortar kratom suppliers have been among the most celebrated, with both businesses earning four-and-five-star ratings among consumers. Alas, strong ratings were not enough to keep kratom in their good graces; at some point, AFG Distribution removed Emerson Naturals Kratom from its collection. Today, the Kratom page on its website reads, “Whoops something went wrong.”

Meanwhile, Brown’s Mercantile appears to have followed the wholesaler’s example; there is no longer any mention of kratom powder on its Facebook profile, nor does it advertise Emerson Naturals Kratom on any of its other social media accounts. Whether this is the result of trouble with Emerson Naturals itself or simply a reaction to ever-changing kratom legality is anyone’s guess. 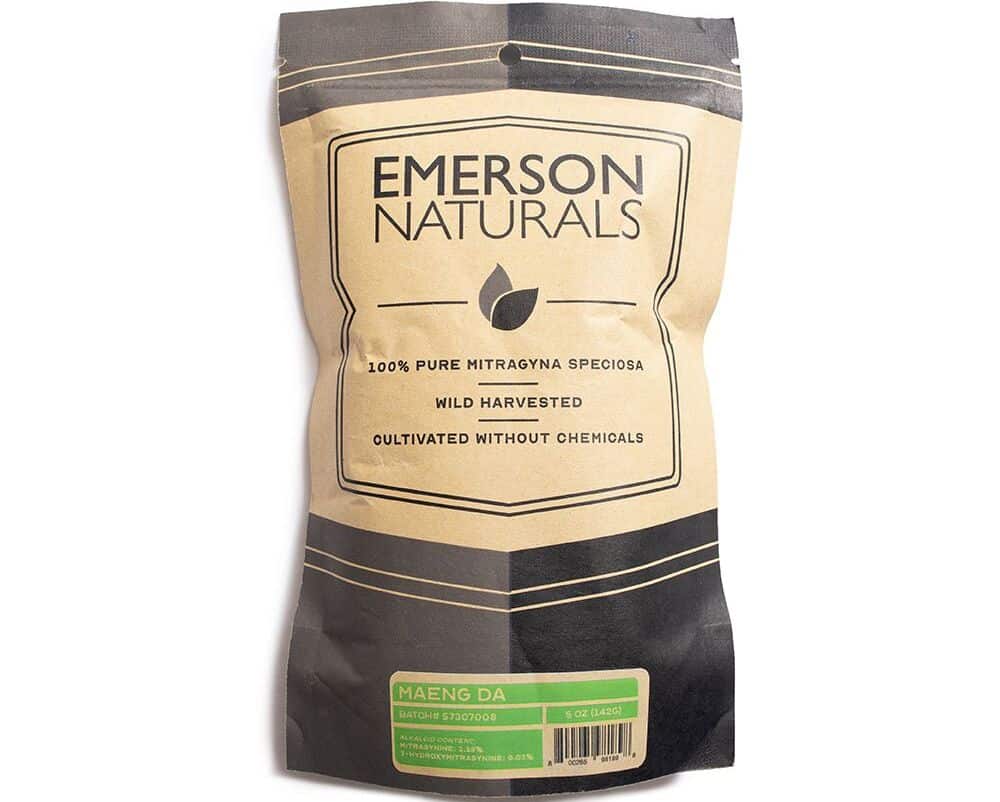 Emerson Naturals Kratom prices are on the low side of normal based on current marketplace standards. At $10.20 for a one-ounce pouch of kratom powder, you will be paying less than you would from many online vendors. For example, Sunday Morning Tea Room charges $15 for an ounce of the yellow vein, while Craving Kratom charges a whopping $56.99 for the same.

Emerson Naturals Reddit posts appear to be nonexistent; we were unable to locate a single post on this social media aggregating platform. What’s more, Emerson Naturals Kratom has never been mentioned on any of the online kratom forums, such as Double M Herbals or I Love Kratom.

It is peculiar for a brand that’s been around for years to lack any consumer reputation. Typically, a vendor will be recognized by YouTube reviews or followers on Facebook. Emerson Naturals never received any attention from influencers or bloggers.

On the other hand, AFG Distribution received four-star reviews on Google. For example, one wholesale client said, “I got to say I really enjoy this great company! Caroline Coval has been my biggest help at AFG. I can message her and get a response immediately. I had a broken piece in my first shipment and I asked her for help. She had the issue resolved in minutes. All while in the mix of the pandemic. She is a true rockstar and I will recommend this distro to anyone!”

AFG Distribution has received many one-star reviews on Google, with several clients complaining about their experience with this distributor. One reviewer said, “If you like babysitting every order to make sure it’s handled properly and shipped on time, then AFG is the place to be.  Their website states ‘When combined with the personal, attentive service you will receive from our staff, we feel this is the surest way to provide our customers with the best shopping experience possible.’  But after being an AFG customer for 2 years, I can honestly say that they are below average in the customer service area.

“The account managers are not reliable; are not proactive with problems they actually created;  blame other employees and make inane excuses when confronted with a problem; at times, are just plain unprofessional.  I am looking forward to the day when I can delete AFG Distribution from my list of suppliers and that day is almost here.  There is nothing that AFG offers that makes dealing with their account managers worth the hassle.”

Emerson Naturals Kratom does not provide proof of third-party laboratory testing. There is no QR code on its packaging and, therefore, you are not given a link to any certificate of analysis. This is a red flag, as most trustworthy suppliers provide some guarantee of the purity and/or potency.

Our research indicates that Emerson Naturals is a less-than-professional brand, one that likes to advertise “wild-harvested” herbs on the front page of its official website while lacking any information about purity or quality control. This business is not backed by a money-back guarantee; returns are accepted, but refunds will be considered on a case-by-case basis.

Many top-shelf kratom vendors provide kratom-free samples, a seal of approval, and a satisfaction guarantee. Emerson Naturals does not offer any of these fundamental amenities. For this reason, we hesitate to classify it as a legitimate brand.

This supplier does not participate in the AKA’s GMP (Good Manufacturing Practices) program, nor does it make any reference to quality control on its website/packaging. This is unfortunate, as the GMP program was designed to hold vendors accountable.

This program sets forth requirements for manufacturing, labeling, marketing, distributing, and verification. A third-party audit is integral to participation in this program and is something to which all participants must voluntarily submit. Emerson Naturals does not volunteer, nor does it independently submit kratom powder to a third-party facility.

The following are our top three picks for the best wholesale kratom brands. These vendors have been thoroughly vetted and are widely considered affordable, potent, and reliable.

Bulk Kratom Now is a Wyoming-based wholesale kratom vendor with kratom sample packs, a satisfaction guarantee, and a host of bargain basement deals. It sells split kilos in a variety of thirty-three unique kratom strains.

EZ Kratom is a lab-tested brand with a wealth of enhanced and plain leaf kratom powders and capsules. This vendor is open on Saturdays, provides detailed tracking information, and boasts a live chat feature that makes connecting with customer support a piece of cake.

Oasis Kratom is a GMP-certified lab-tested supplier out of Las Vegas, NV. It gives its patrons everything from kratom coupon codes and kratom same-day shipping to low-priced crushed leaf kratom. Oasis Kratom provides kratom sample packs and a satisfaction guarantee.

As you can see, Emerson Naturals Kratom is a below-average kratom brand that’s undeserving of much attention. We think you’ll agree that there are plenty of better choices on the market.

If you’re still on the hunt for a quality source, you’ll want to do your homework. Look into vendors’ backgrounds, check their status with the AKA, and see what customers have to say about them. You can check out our Complete List of the Best Kratom Vendors for a full rundown of the top brands in 2022.